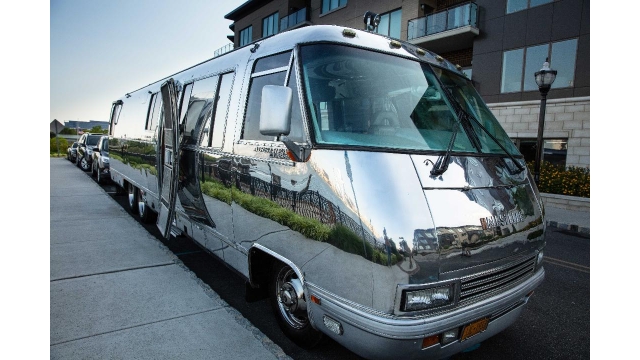 The company now provides fully-outfitted Airstream RVs from 1975, 1979, and 1994 for event-specific or longer-term rental use. Founded in 2019, the firm allows clients to use fully-functional and well-appointed, vintage RVs to host a wide range of outdoor promotional events.

More information can be found at https://www.rvairstream.com

Daylight Studio now offers these retrofitted Airstreams, ranging in length from 20′ to 36,’ both for commercial use and as props, green rooms, and celebrity motor homes for the television and film industry. Each RV comes complete with a kitchen, air conditioning/heating, bathroom and shower, and a professional driver.

Few things say “American lore” quite like the Airstream, a 90-year-old symbol of wanderlust, transience, and the spirit of the road. Also known as the “silver bullet,” due to its iconic shape and gleaming aluminum skin, the Airstream has developed a cult-like following and ownership base that includes celebrities like Tim Burton and Sean Penn. Airstreams have been featured in dozens of movies and TV shows since the 1980s. Of the 400 competitor companies born in the immediate wake of Airstream’s debut in 1932, only Airstream remains today.

Daylight Studios recognizes the allure and the practicality of their fleet of Airstreams. For example, customers can promote new product lines in different parts of the city and let consumers sample its goods as part of a product launch. The well-equipped campers can be used as beauty parlors and hair salons in shopping centers, parks, streets, and convention centers – or as backdrops to and staging areas for wedding parties, photoshoots, and festivals.

The company’s smallest vehicle, the 1974 20′ Argosy “Lovestream” accommodates five people and has a kitchen and minibar to go along with its state-of-the-art sound and lighting system. Its cousin from 1979, the Excella Class A – complete with vintage furniture – can fit nine people.

“Our aim, quite literally, is to make customers feel at home – even when working and on the road,” said a company spokesperson. “Our self-contained Airstreams are not only one-of-a-kind showcases, but they are also multi-functional offices on wheels.”

Interested parties can go to https://www.rvairstream.com for more information.