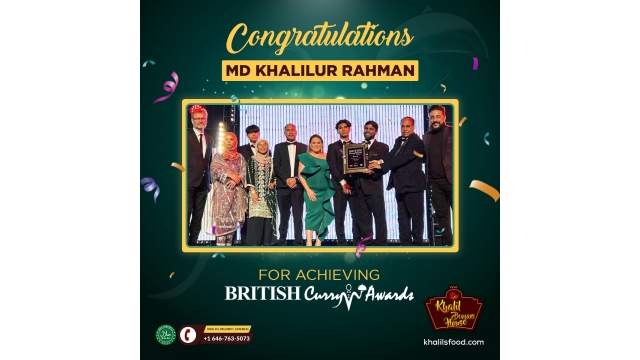 Bangladeshi Chef, Md. Khalilur Rahman won the British Curry Awards 2022/ ‘Curry Oscar”, the highest honor for culinary artists in the hospitality industry. He won this incredible accolade as ‘The Personality of the Year’.

The award was presented to Chef Khalil by Geoffrey Ali, son of the late Enam Ali, the founder of the British Curry Awards at ‘The Evolution London’ on November 28, 2022, in the presence of two thousand guests.

British Prime Minister, Rishi Sunak, expressed his heart-warming word of appreciation through a pre-recorded video. Due to his busy schedule, he couldn’t be physically present at the event yet conveyed his best wishes for the nominees.

The mega event was dazzled with the presence of esteemed personalities and celebrities. Syeda Muna Tasnim, the Bangladesh High Commissioner in London, made a significant presence in the program.

The British Curry Awards, also known as the Curry Oscars, is a globally recognised award ceremony that honors restaurant owners worldwide. In association with Just Eat, the British Curry Awards paid tribute to the finest curry houses, as voted for by the British public. Based on the public’s choices, the nomination process is authentic as it follows rigorous steps with an independent panel of judges. Justine Ali, daughter of Enam Ali MBE, was in charge of the mega-event.

Md. Khalilur Rahman has 3 ventures under Khalil’s Food – Khalil Biryani House, Khalil Halal Chinese and Khalil Catering – highly acclaimed restaurants serving authentic flavors of Bangladeshi dishes and diverse meals in the Bronx and Jamaica. The restaurant’s delicious meals have attracted renowned personalities from different parts of the world. MD Khalilur Rahman’s original recipe, Biden Biryani, has been the turning point in his culinary career. It brought him massive fame and appreciation at home and abroad.

It’s a moment of immense pride and honor for the Bangladeshi community as MD Khalilur Rahman makes history by becoming the first person outside the UK to win the award from the “Best Personality of the Year” category.